Royal Caribbean will cease DreamWorks programming on its ships in 2019

In:
Dreamworks
By:
Matt Hochberg

It appears Royal Caribbean will cease offering DreamWorks programming on its ships for sailings that depart on or after April 1, 2019.

Royal Caribbean sent guests on select sailings an update about the ship's programming to inform them of the change. The cruise line reiterated their commitment to offering plenty of family programming to its guests. 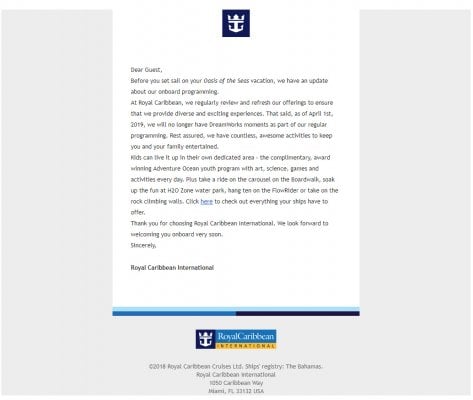 All sailings that depart before April 1 will have the program for the entire sailing.  The only exception to this end date is the DreamWorks ice skating show onboard Allure of the Seas. Due to a previously scheduled cast rotation, the last Allure sailing featuring the DreamWorks show will be the March 17, 2019 sail date. After that sailing, Allure will feature a new ice show by Royal Caribbean Productions team.

There are nine Royal Caribbean ships that offer the DreamWorks Experience onboard, which include activities such as character meet and greets, Adventure Ocean programming, films and character breakfasts.

Royal Caribbean said the decision was made as part of its regular process of reviewing and refreshing their onboard offerings.