In:
News Royal Caribbean Monarch of the Seas

Dozens of infractions on a recent Centers for Disease Control inspection earned Royal Caribbean's Monarch of the Seas a failing score of 85 out of 100 on its November 18 vessel sanitation inspection. 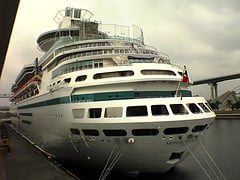 The inspection was unannounced and Monarch barely missed passing by one point (86).

Monarch was cited for among other infractions

The inspection also revealed that Monarch of the Seas had not adopted new standards from the CDC's Vessel Sanitation Program's (VSP) Operations Manual, which include carrying a test kit for measuring alkalinity in the swimming pools and posting poolside safety signs warning passengers not to use the facilities if they are "experiencing diarrhea, vomiting, or fever" and encouraging them to shower before entering the facility.

Royal Caribbean issued a statement in which it was "extremely disappointed" to learn that Monarch only received an 85 during its last inspection. The line added that it is working closely with the proper authorities to "correct and remedy the deficiencies found aboard Monarch that caused the low score," and that it was "confident that Monarch of the Seas would receive a passing score when the ship was re-inspected." We've reached out to Royal Caribbean and the CDC to determine if and when the ship was re-tested. We'll keep you posted.