A look at the Royal Caribbean's Ben and Jerry "Sweet"

In:
Royal Caribbean Freedom of the Seas Ben and Jerry

The "Ben & Jerry's Sweet" on Royal Caribbean's Freedom-class ships are probably the only inside cabin on a cruise ship called a suite. For fans of Ben & Jerry's ice cream booth, cabin 6305 on the Liberty of the Seas, Freedom of the Seas and Independence of the Seas is a real insider tip. Shown on deck plan as a normal cabin and not specifically mentioned in the catalog this "Ben & Jerry's" cabin is but one of the most unusual cruise ship cabins of all. 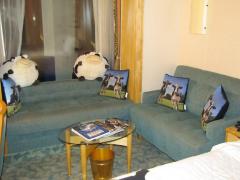 If you believe the myths surrounding this cabin, then she's on the Freedom of the Seas, rather emerged by chance. Cabin 6305 was a normal first inside cabin category of  a promenade stateroom with a window to the Royal Promenade. The cabin lies directly above the Ben & Jerry's ice cream shop on the Royal Promenade. And because on the porch of Ben & Jerry's two life-size cow figurines, the passengers look through their window on the right - sorry - back part of these cows. It also fell on Royal Caribbean, and so we needed a way, this disadvantage for the passengers of the cabin 6305 to compensate a little. And so began gradually the cabin's changeover with some cow's and Ben & Jerry's equip design.

The rest, as they say, is history: Cabin 6305 has a separate door plate and became the "Ben & Jerry's Sweet." Through the entire car pulls to the cow motif, with cow-sheets, pillows, cow, cow's picture on the wall and much more. The best thing about the cabin but the vouchers for a complimentary ice cream at Ben & Jerry's and - unheard of for an inside cabin - access to the Concierge Lounge (for passengers over 18 years), which are otherwise only available to passengers reserved for those who booked a suite . On the other hand, consistently, since the "Ben & Jerry's Sweet" is indeed now the name for a suite.

Welcomed the passengers of cabin 6305 with a witty letter in which the unusual design of the cabin is explained:

Welcome aboard the Freedom / Liberty / Independence of the Seas!

Due to your stateroom's proximity to our delicious Ben & Jerry's ice cream shop and because of your unique view of Ben & Jerry's mascots, overlooking the Royal Promenade, we've proudly designated this stateroom Ben & Jerry's "Sweet".

Accommodations in this "sweet" come with benefits not available to our other guests.

However, should you find the cows outside of your windows to be a "moo" isance during your cruise vacation with you, please contact Guest Relations by dialing "0" and we'll be pleased to "moo" ve you to an "udder "stateroom (if available).

In the meantime, we wish you a pleasurable cruise vacation.

However, not all passengers are completely happy with the cabin. On one side it borders namely at a service area, some passengers reported here from disturbing noises in the night . To the other side there is a connecting door to the neighboring cabin and cabins with connecting doors are always wide-impaired as a cabin with a solid wall to the neighboring cabin. But that does not feature the "Ben & Jerry's" cabin, but a feature of many other cars is also on board.