Royal Caribbean has put its 2020 Cuba sailings online for guests to begin booking. 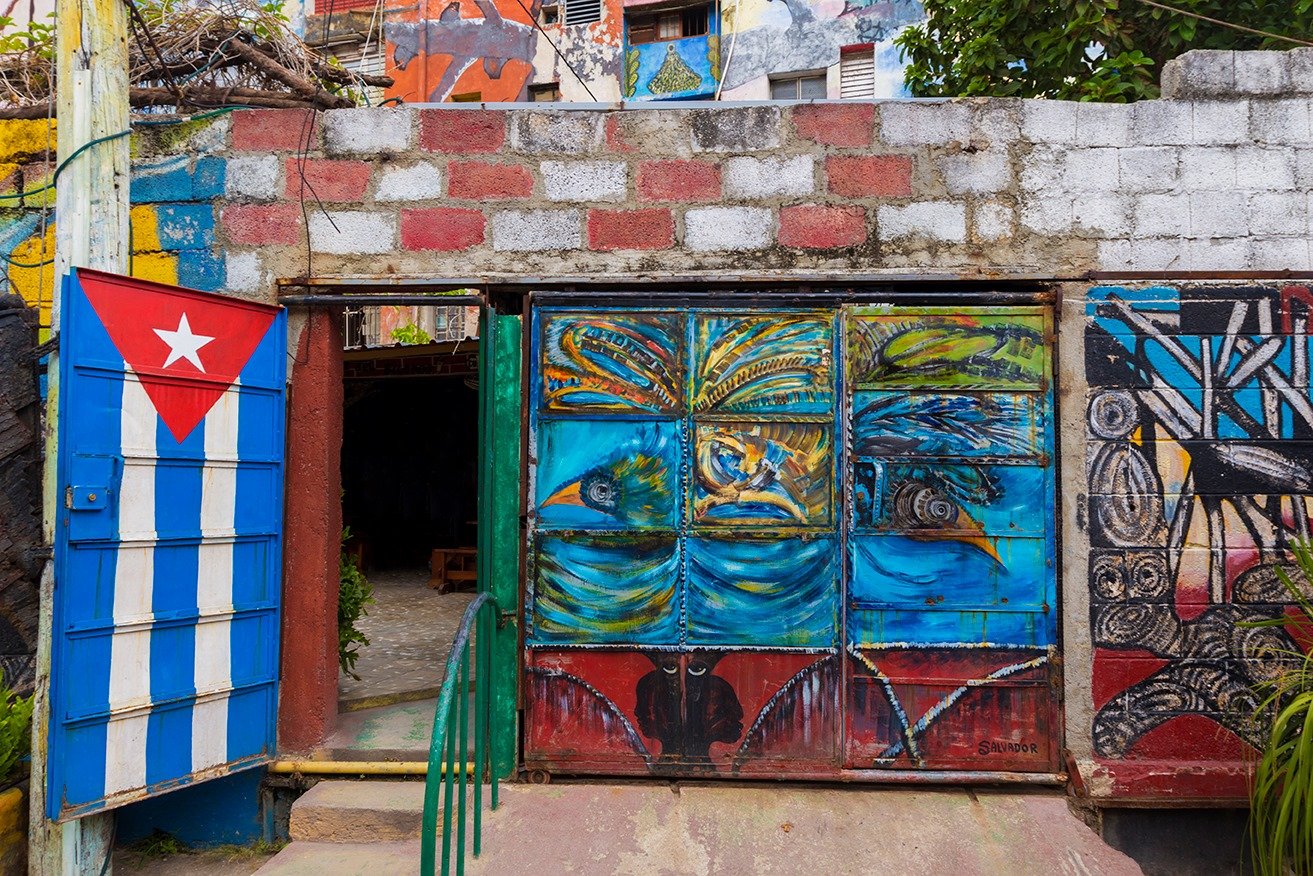 Empress of the Seas will offer 3 to 8 night sailings, including an overnight or a late stay in Havana, plus Perfect Day at CocoCay on select sailings.

These new 2020 Cuba sailings are available to book exclusively by Crown & Anchor Society members on May 16, 2019. Bookings become available to the general public on May 17, 2019.

You can view a full list of 2020 Cuba sailings here:

Royal Caribbean released its 2020 China sailings for guests to book, which includes sailings on Quantum of the Seas and Spectrum of the Seas. 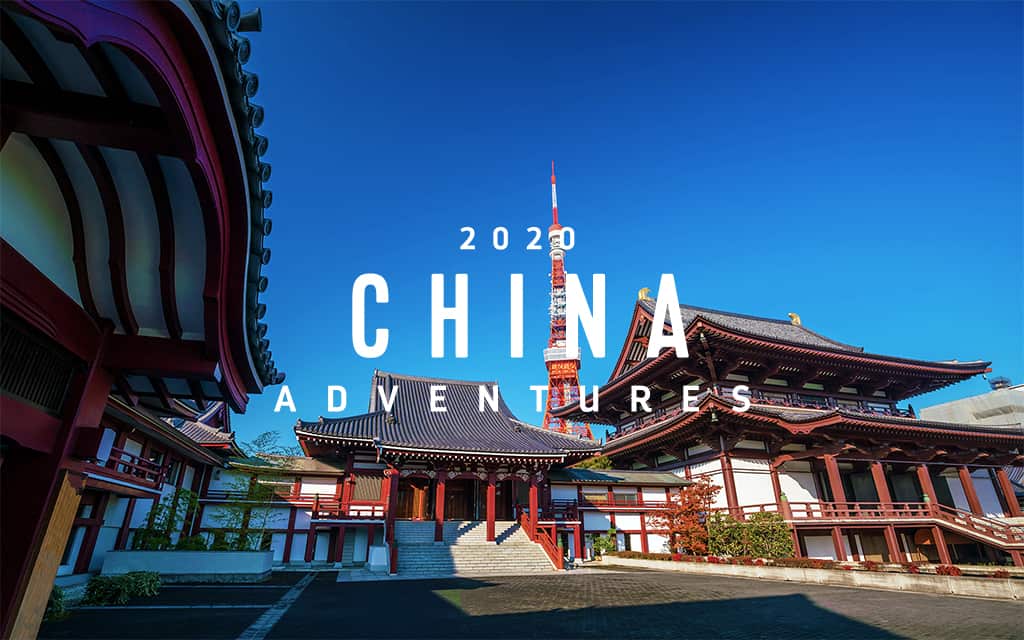 The new bookings are available to book for Crown & Anchor Society members on May 7, 2019. Bookings open to the general public on May 8, 2019.

In:
Deployment Schedule Odyssey of the Seas

Royal Caribbean has posted an update for its remaining 2020-2021 deployments, with some additions to the schedule, as well as date changes.

Royal Caribbean Blog reader Pippa Madden alerted us to an updated schedule, which expanded on the previously posted schedule. 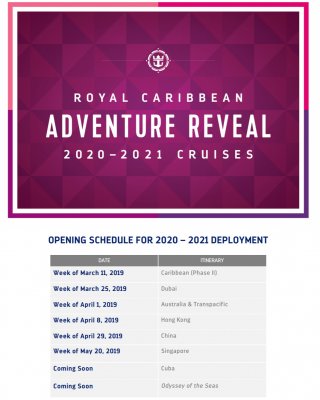 The updated schedule added releases for Hong Kong, as well as referencing a deployment schedule for the recently announced second Quantum Class ship, Odyssey of the Seas.

Royal Caribbean released its deployment schedule for the remaining 2020-2021 itineraries, which indicates when these sailings will go on sale. 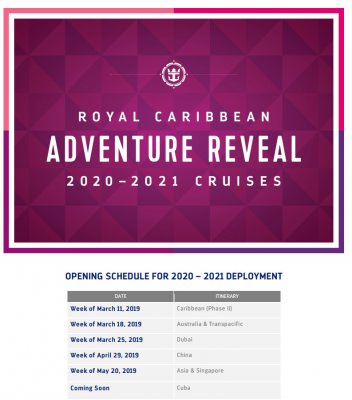 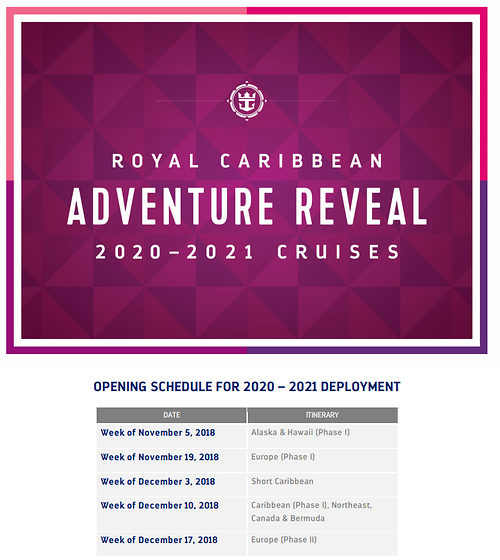 Royal Caribbean released today its Short Caribbean and Cuba itineraries for its two smallest cruise ships, Empress of the Seas and Majesty of the Seas. 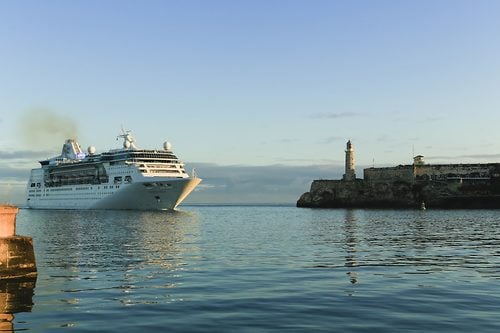 The new sailings are available for booking now, and run from April 2019 through the end of December 2019.

Majesty of the Seas will sail from Fort Lauderdale and offer 4-, 5, and 7-night itineraries to stops in Cuba, the Bahamas and Western Caribbean.  Some itineraries include overnight stops in Havana, Cuba.

Empress of the Seas will sail from Miami, Florida and offer a variety of sailings to multiple ports in Cuba, along with visits to other Western Caribbean ports. Empress will not only offer overnight stops in Havana, but will also visit other Cuban ports, such as Cienfuegos and Santiago de Cuba.

You can view a full list of 2019 itineraries for Majesty of the Seas and Empress of the Seas.

In:
Jewel of the Seas Deployment Schedule Dubai

Royal Caribbean announced today it will base one of its cruise ships in Dubai for a few months between December 2019 and March 2020. 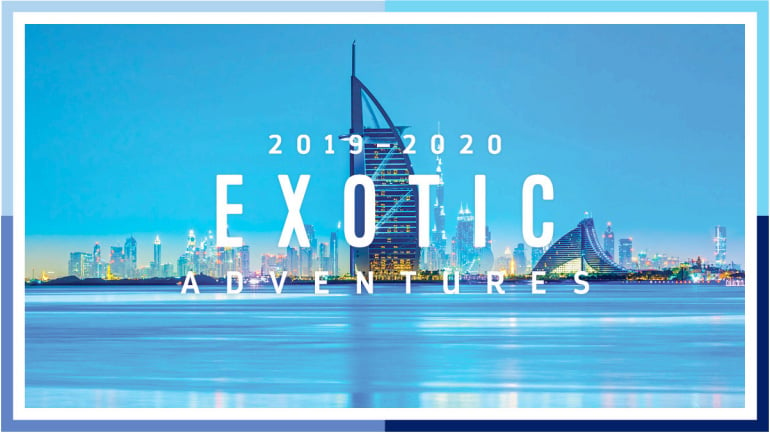 Jewel of the Seas will call Dubai home, and offer 7-night sailings out of Dubai to destinations in the Middle East, including maiden calls to Sir Bani Yas, Doha, and Bahrain.. You can view a full list of available Jewel of the Seas sailings from Dubai here.

The two new itineraries will be available to book from April 24 for Crown and Anchor Society members and from April 25 for the general public.

Royal Caribbean is returning to Dubai, following a two-year absence.  Jewel will sail to Dubai, following a summer season in the Mediterranean that will also see Royal Caribbean return to Turkey. Like the Dubai sailings, the newly announced Jewel of the Seas itineraries will go on sale to Crown and Anchor Society members on April 24, and to the general public on April 25.

The 2019/20 season will kick off with the arrival of Radiance of the Seas to Sydney on October 9, 2019, Ovation of the Seas on October 20, 2019, and Voyager of the Seas will begin her season with a three-night sampler cruise on November 30, 2019. Together, the three ships will offer 61 sailings, ranging from two to 19 nights, and sailing to nine different countries including Australia, New Zealand, Fiji, French Polynesia, New Caledonia, Singapore, Indonesia, the USA and Vanuatu.

Ovation of the Seas returns for her fourth and longest season yet down under, following her maiden season in Alaska in the Northern Hemisphere summer.

Ovation of the Seas, will offer guests a range of South Pacific, Australia and New Zealand itineraries – including five incredible New Zealand and South Pacific hybrid sailings, nine New Zealand voyages and new 18 and 19-night sailings between Sydney and Hawaii calling in Papeete, Moorea and Bora Bora in French Polynesia.

Voyager of the Seas returns to her homeport of Sydney after a one-year hiatus, fresh from a multi-million dollar revitalisation in late 2019. She will replace sister ship Explorer of the Seas, which returns to cruising in Europe and the Caribbean in 2019/20.

“Voyager of the Seas will be making her grand Aussie comeback in 2019, boasting a stack of new features following a multi-million dollar makeover – all part of our Royal Amplification programme, which will see us invest US$900 million in modernising our fleet,” said Adam Armstrong, managing director Australia and New Zealand.

Australia’s second largest ship, Voyager of the Seas will be back to focus on South Pacific and Sampler voyages, with a range of two to 14-night sailings. Along with onboard amenities like the FlowRider surf machine, rock-climbing wall, ice-skating rink, Broadway-style shows and full sized sports court, she’ll boast plenty of brand new features yet to be announced, all destined to appeal perfectly to the Australian market. She will also offer more short “sampler” sailings than ever before – ideal for the new-to-cruise – as well as a six-night Tasmania sailing, an eight-night Queensland sailing and two epic repositioning voyages between Singapore and Sydney.

Radiance of the Seas returns for her ninth season and will offer her usual New Zealand program as well as an expanded range of South Pacific sailings calling to destinations such as Noumea, Mystery Island and Port Vila.

As well as her additional eight to 11-night South Pacific sailings, Radiance of the Seas will sail a three-night Sampler cruise, a 16-night Top End sailing from Sydney to Fremantle, and an epic 18-night Bottom End sailing from Fremantle to Sydney. Guests can also cruise on six, 9 to 13-night New Zealand sailings and two 18-night Hawaii repositioning sailings. 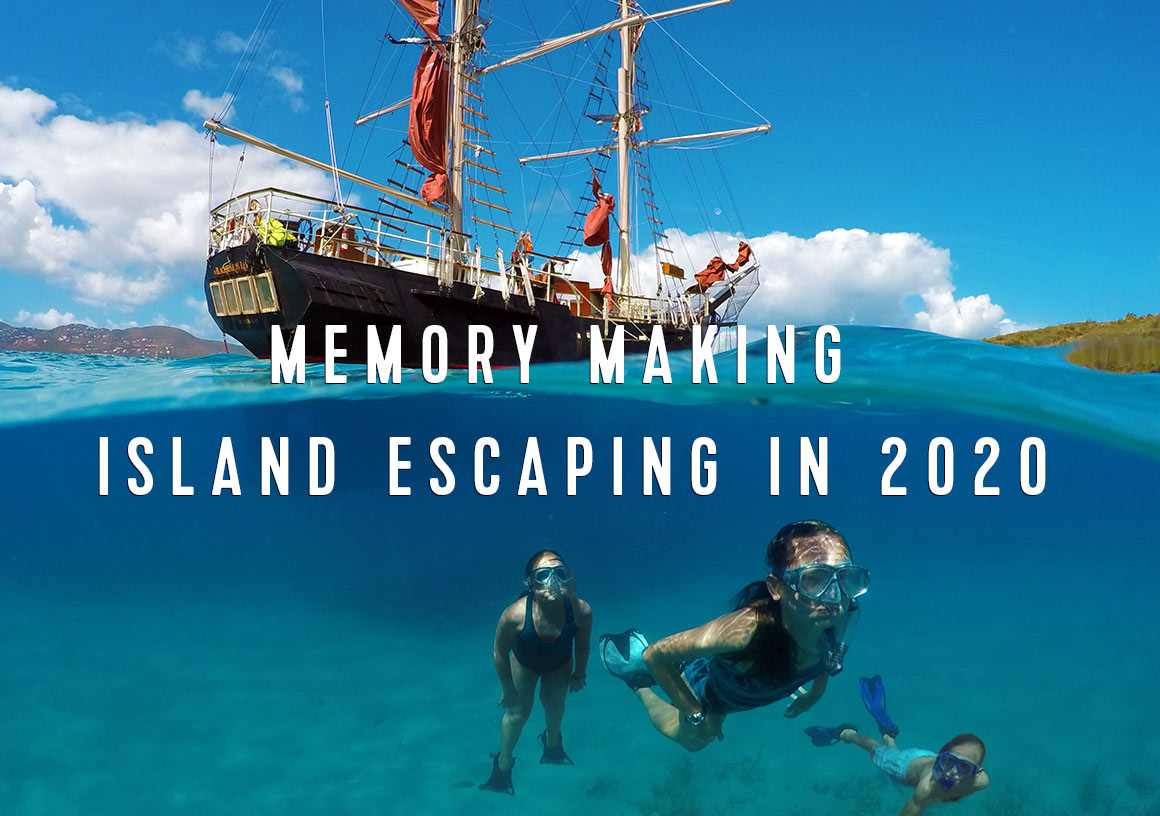 Vision of the Seas will offer double the Panama Canal offerings before heading to San Juan for her Caribbean adventure, including stops at a new destination for Royal Caribbean, Punta Cana, Dominican Republic.

Adventure of the Seas will visit the Caribbean from Fort Lauderdale, with 6 and 8 night itineraries to destinations like Grand Cayman, St. Thomas, San Juan and beyond.

Explorer of the Seas will return to the United States, offering 5 night Western Caribbean and 9 night Southern Caribbean adventures sailing from Miami.

Both Anthem of the Seas and Grandeur of the Seas will offer stops at the newly refurbished CocoCay, with 7 and 8 night itineraries in Fall 2019. 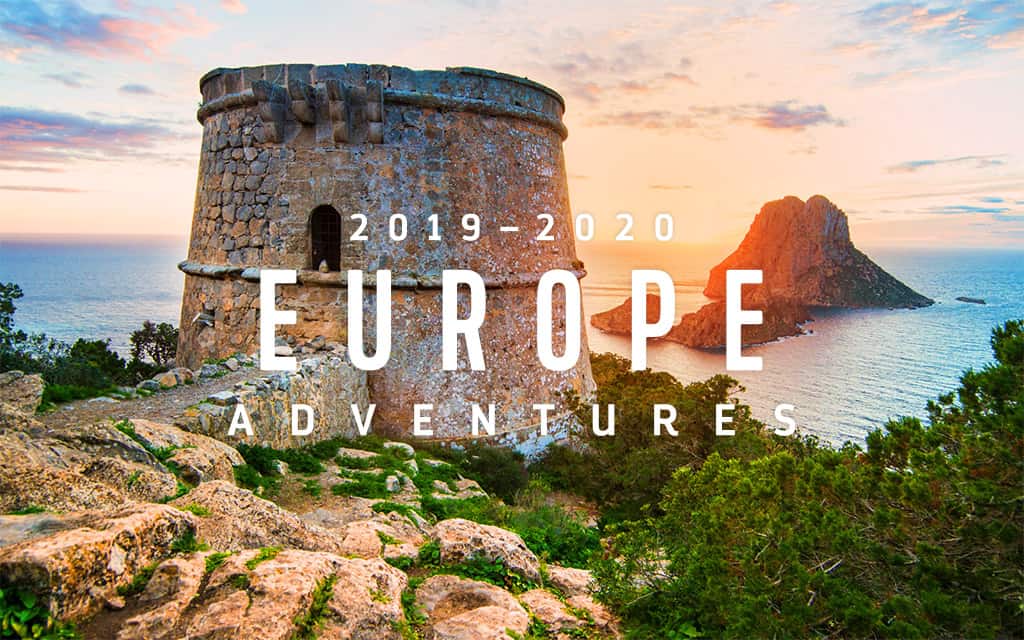 The newly released sailings include:

These new sailings are also being shown as available for booking via Royal Caribbean's web site.

Royal Caribbean previously announced European sailings for summer 2019 on these ships as well.