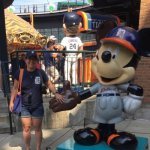 Good morning everyone! After following a ton of great live blogs, reviews on this site, I have decided to document my time aboard Adventure of the Seas commencing tomorrow ? I had intended to wri

At this point I got lost and actually walked in the direction of the San Cristóbal Fort. Unfortunately, due to time constraints, I elected not to go in, but I grabbed the free trolley toward old San J

Another terrific day, totally lit as the kids would say ? Finally made my first visit to Labadee and she did not disappoint! But first it was off to the MDR for French toast breakfast..